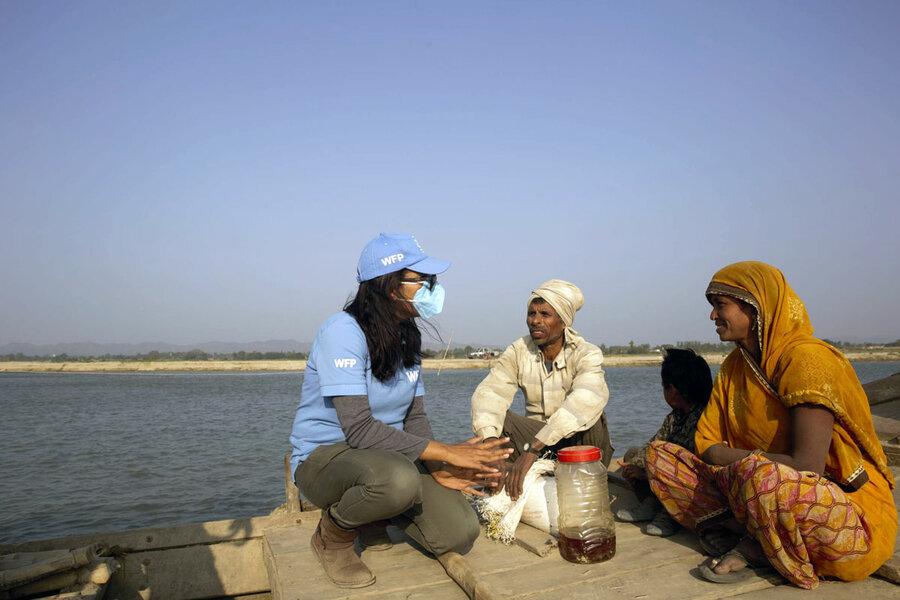 A WFP staffer talks to Pawan Sunar, a labourer, and his wife Kanyawoti, a tenant farmer in Duduwa village in Banke.

Four years ago, the village of Duduwa, in the district of Banke in the south of Nepal, was hit by heavy monsoon rains. Crops were destroyed. Food insecurity in one of the world’s poorest countries got worse. 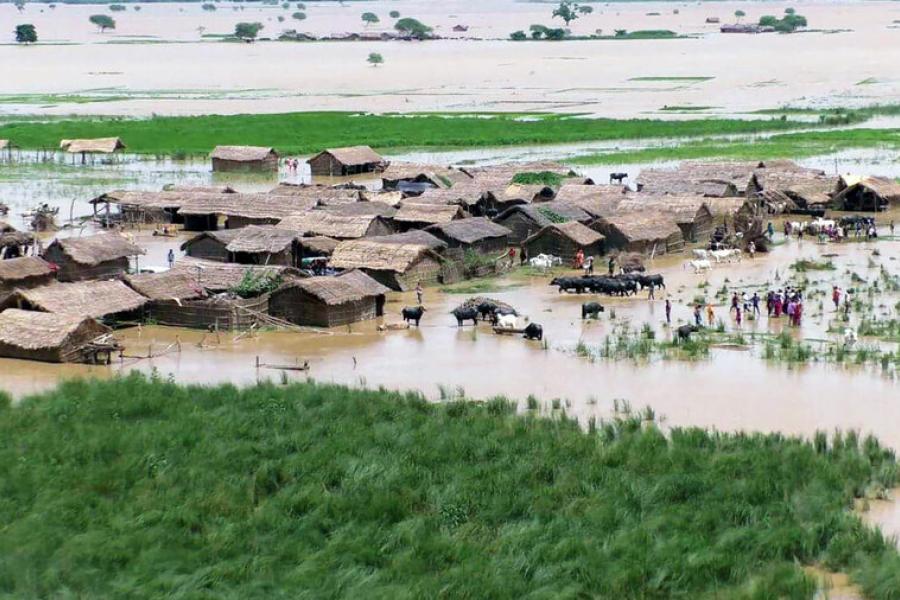 A bird’s-eye view of the Duduwa village submerged by the Rapti river.
Photo | WFP/Srawan Shrestha

In December I visited the flood-affected communes in one of the worst-hit areas to meet two families affected supported by the World Food Programme (WFP). Last July, WFP distributed cash to 2,700 people in the flood-prone Banke and Bardiya districts, targeting families headed by disabled people, older people, and women. The anticipated floods did not arrive but I listened to their stories of loss and devastation from the last big shock. 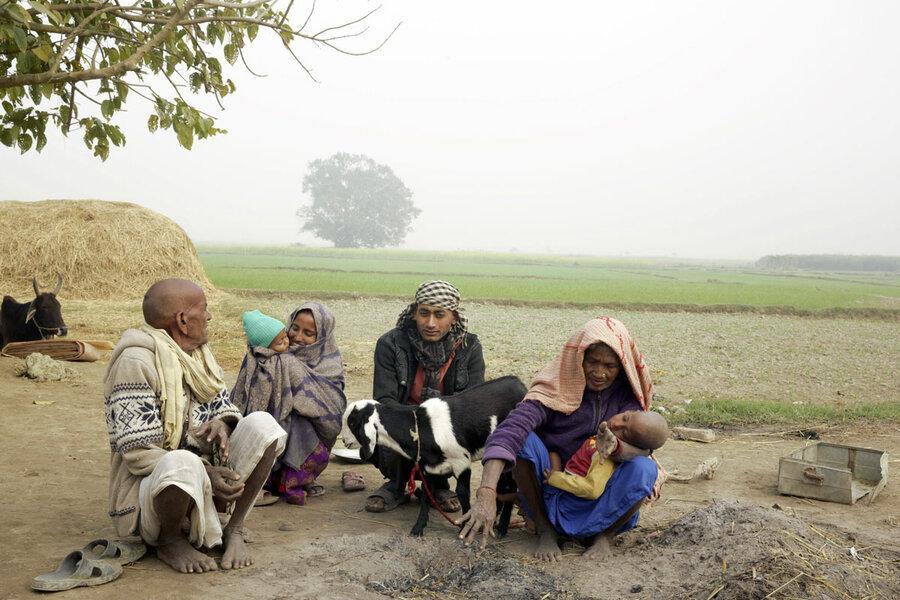 Putta Lal Mahout, 28, lives in a rural commune in Duduwa village. His older son was born with special needs and cannot move any part of his body.

“I was sleeping when the floods hit our village,” says Putta Lal. “The water was soon waist-high. We had nowhere to go”. He gazes intently at the intricate patterns of the traditional charpai, or rope bed, and recalls the harrowing experience of when the waters came. 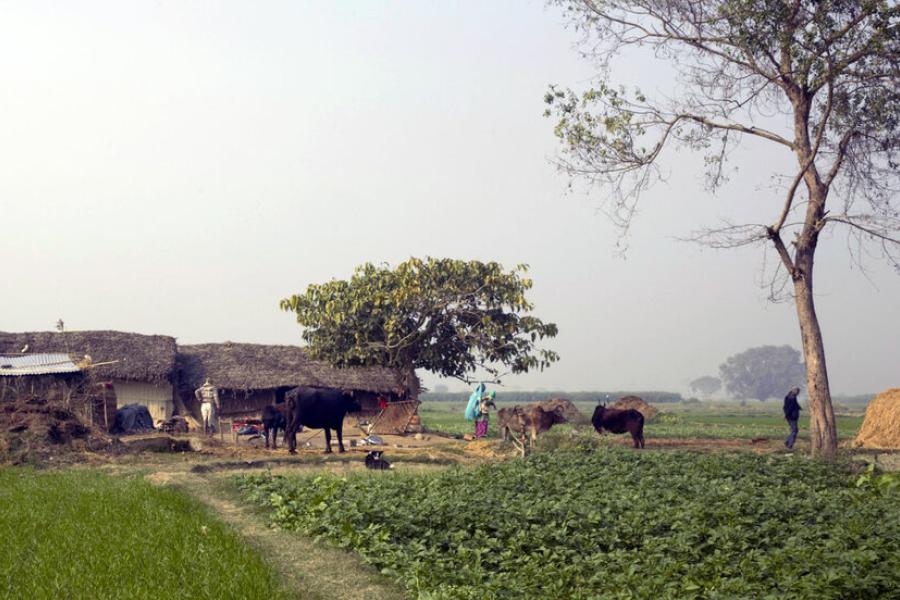 Putta Lal in front of the Rosewood tree that he and his family clung to for 18 hours during the last flood.
Photo | WFP/Srawan Shrestha

To survive, they had to ascend. “I carried my family one by one on my back and helped them climb onto one of the branches of this tree,” says Putta Lal. “We clung there for a terrifying 18 hours, with no food to eat and drinking the floodwater around us. The floodwater also swept away a pair of oxen. I rescued one from Jamnaha [the Indian town across the river]. The other one is still missing.” 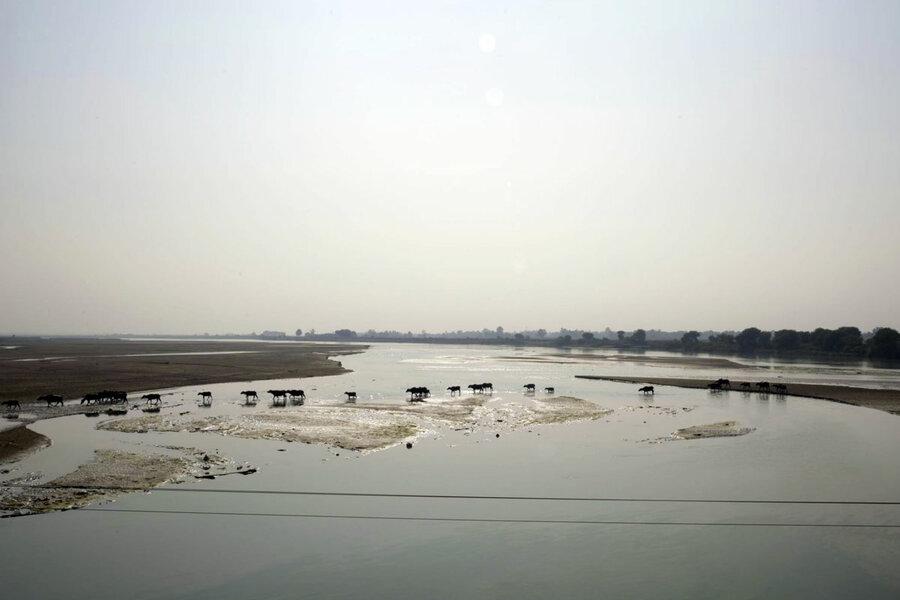 A herd of buffalo crossing the mighty Rapti river–the river is both a blessing and a curse.
Photo | WFP/Srawan Shrestha

A rescue boat sent by commune arrived the next day to assist his community. He managed to carry his family into the boat for the local evacuation centre. They spent a week in that shelter before returning home. 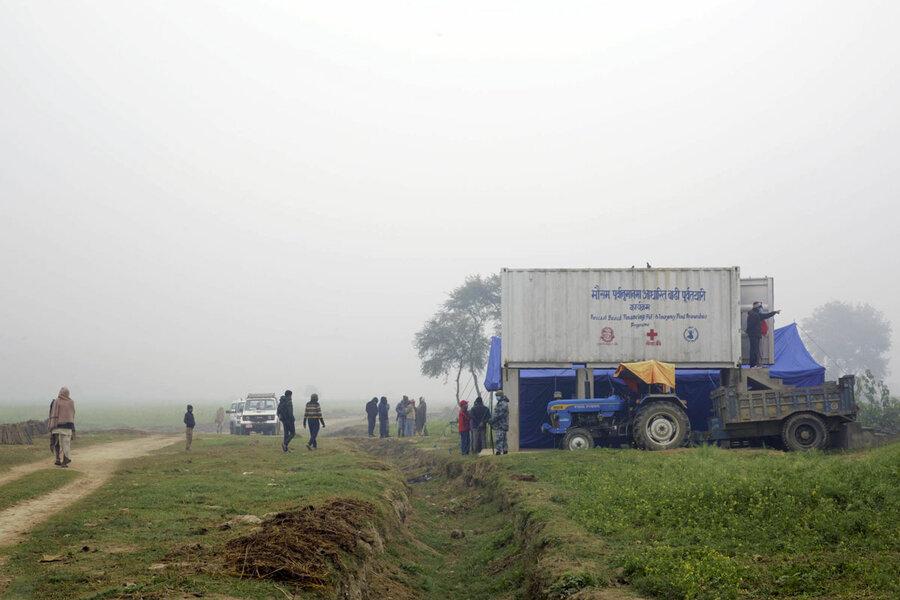 Now, back at home, Putta Lal is happy to see a new container with non-food items that WFP has put up in the big field in front of a local school. “It is easier now with the container,” he says. “There are many useful things stored inside: life jackets, buckets, tarpaulins, mattresses and sirens.”

“Whenever the siren is activated, the first thing we are supposed to do is pack all our important documents, as well as food and water to last for several days, inside the go-bag. Then we carry it to the container for safekeeping.” 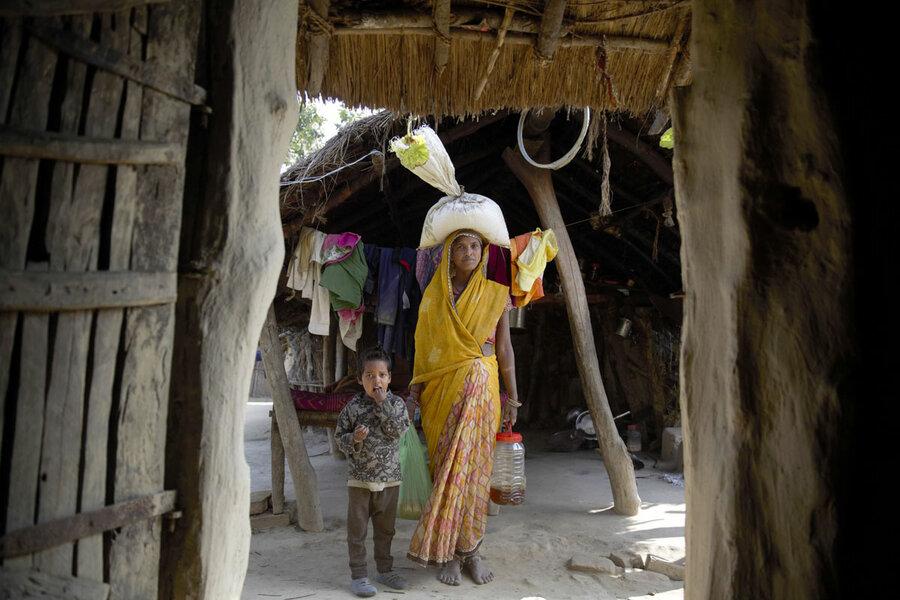 Kanyawoti Sunar bought rice and other essential supplies with the cash assistance she received from WFP Nepal.
Photo | WFP/Srawan Shrestha

After a 10-minute ride down the road, we reach a house next to a river where Kanyawoti Sunar and her son are waiting for us. He is sick with fever and coughs - he has been since the start of winter. Kanyawoti works as a tenant farmer while her husband Pawan Sunar is a casual labourer.

We take a boat ride together with the Sunar family to the neighbouring Indian town of Jamnaha in the Indian state of Uttar Pradesh. During our journey, Pawan says that he crosses the border into India at least two or three times a month because food is cheaper, and the family can access better medical facilities. 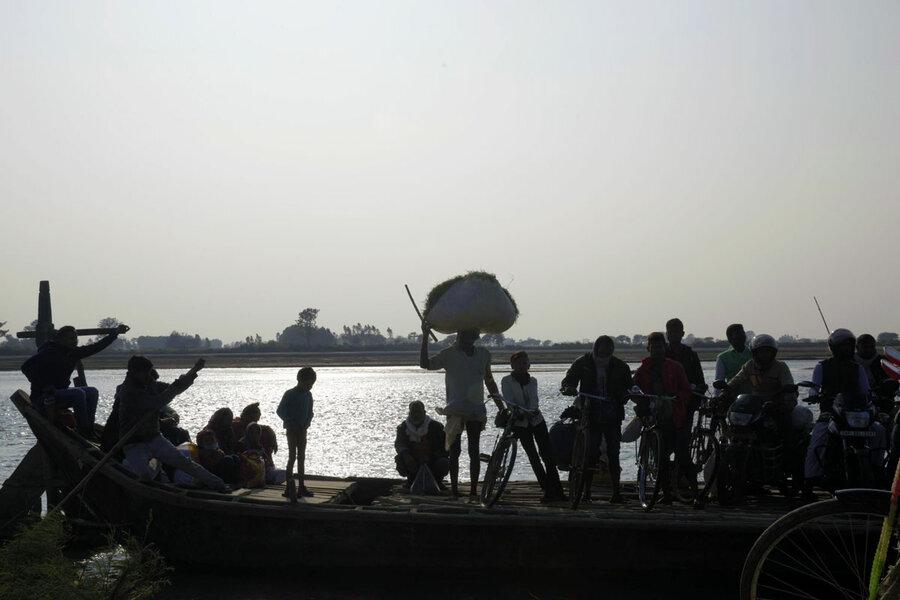 Pawan usually takes the half-hour boat ride to cross into India. However, when the river floods he is forced to take a route that takes all day. “There is no boat service during the rainy season. There is water everywhere. Several villages, including mine, get inundated every time it floods.”

The exterior wall of his family home collapsed in the last flood and most of their belongings were destroyed – including precious family memories ripped from their frames and washed away by the floodwater. 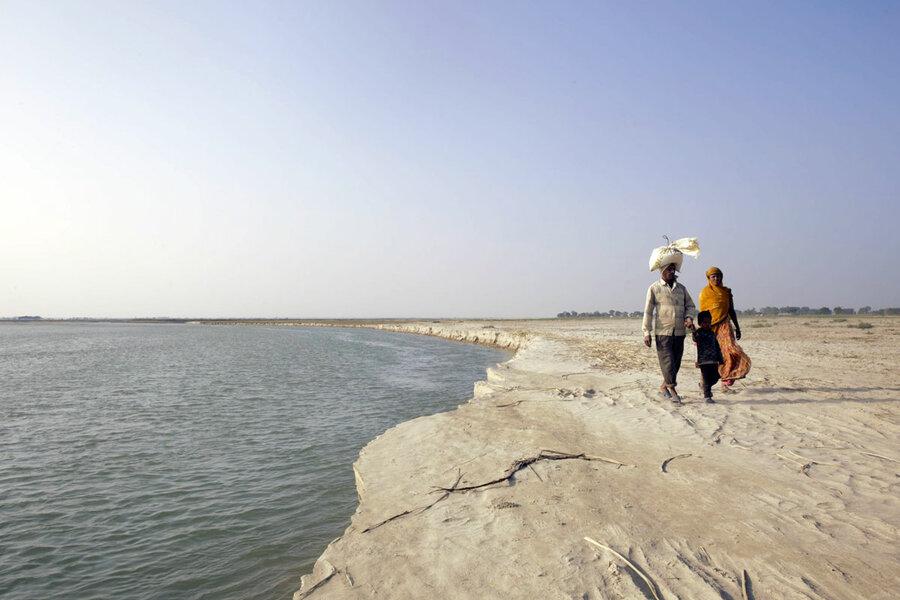 WFP-distributed cash support provides vulnerable communities with the means to secure essential items in anticipation of floods. Pawan used the US$30 he received “to buy food—salt, chillies, turmeric powder, as well as soap.” 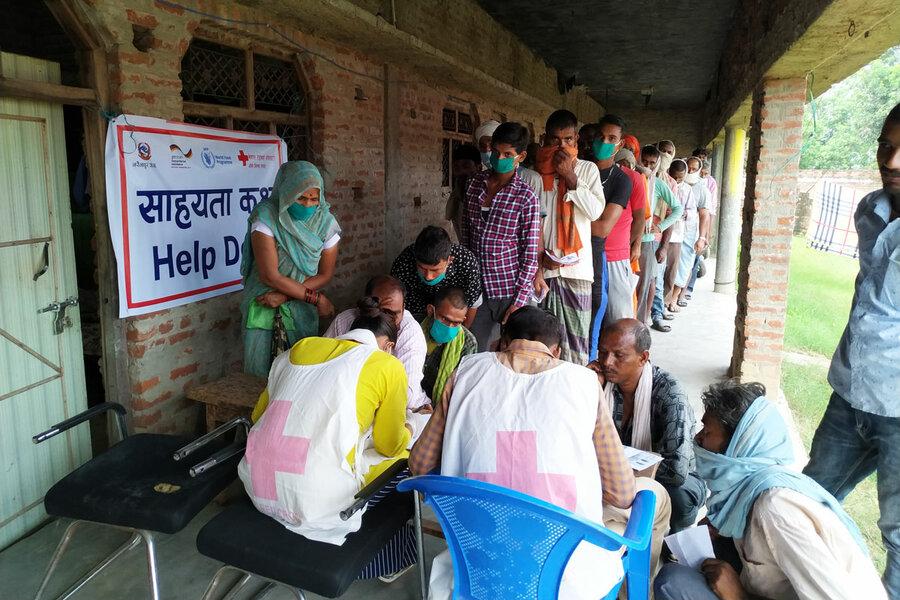 He is thankful to have received the money as he'd used up all his savings: “The assistance from WFP was timely and helped me provide for my family. With the lockdown in place due to COVID-19, I did not have a single penny at home.”

With the cash assistance, he was able to buy enough rations to last six weeks. 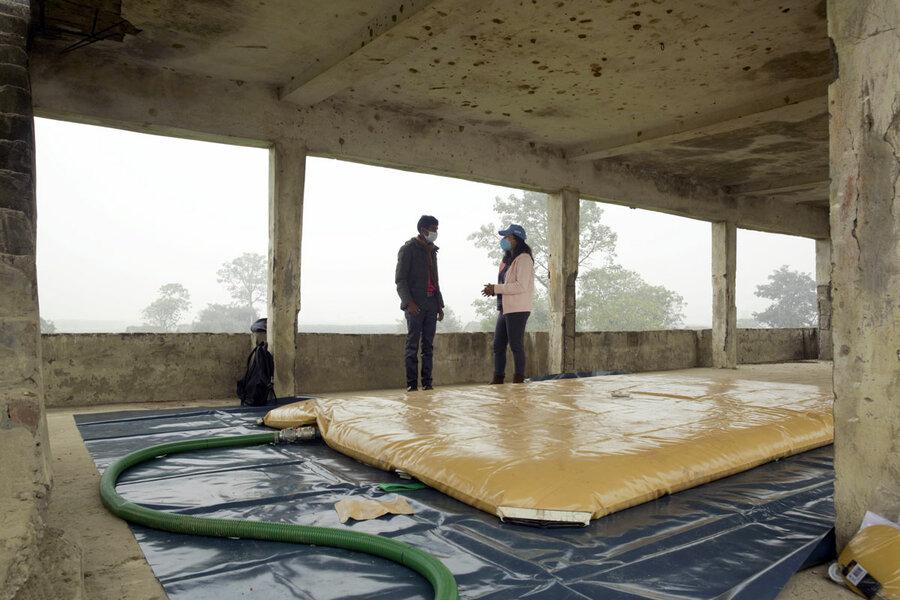 A WFP-supported water bladder, set up in a safe area to store drinking water prior to a flood.
Photo | WFP/SrawanShrestha

Pawan also took part in several community training programmes organized by  the Nepal Red Cross Society and WFP, including one on disaster preparedness and prevention, and another on community first aid. 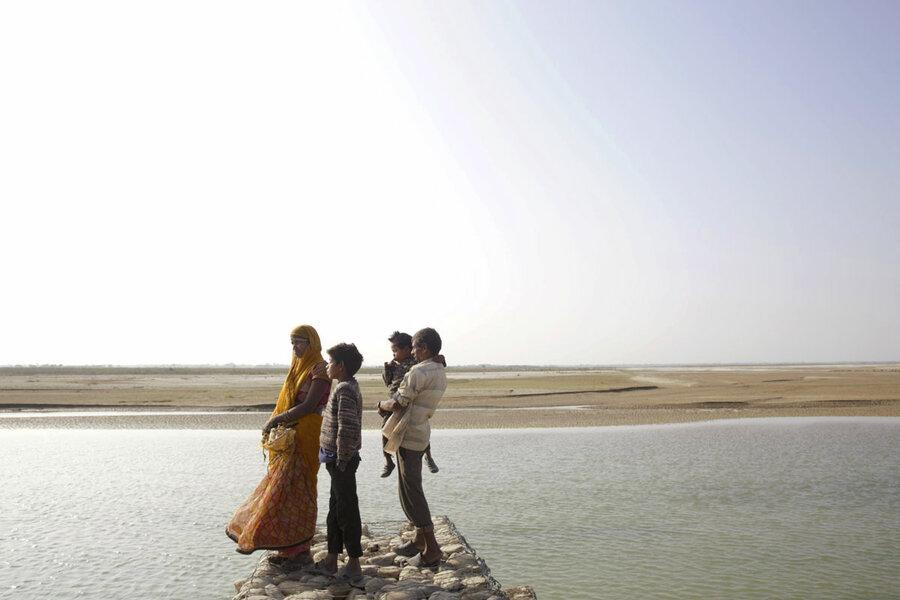 “[It] has taught us how to provide first aid to the injured immediately after rescuing them,” says Pawan. “We are also trained in setting up tents and water bladders as well as evacuating villages to higher ground. We know the next flood can hit us any time. But now we are better prepared and no longer as scared as we used to be.” 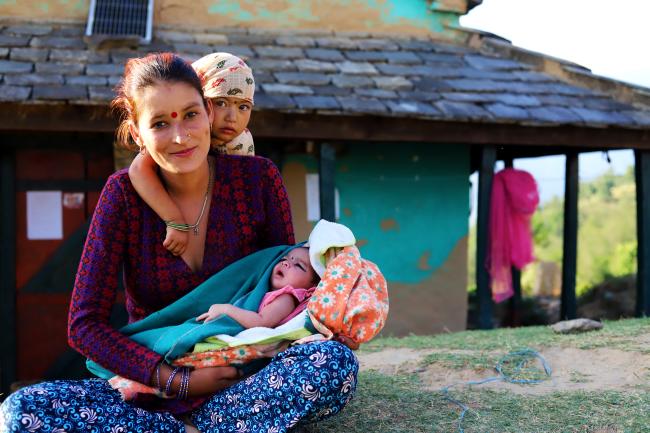